About a year and a half ago I went on a quest to find the perfect IDE. Since then, it’s never really stopped but I have settled on PhpStorm as my go to editor of choice. The latest version to be released is PhpStorm Version 6 and is a major release with some significant improvements.

PhpStorm 6: Now Sleeker than Ever

Check out these screenshots of my customized UI and code theme for PhpStorm. I’m using Darkula theme for the UI and Eli’s Dark code style. The code highlighting is less-pastel colored than the Darkula code style. The php tags are highlighted in red and the variables pop out nicely in soft green. 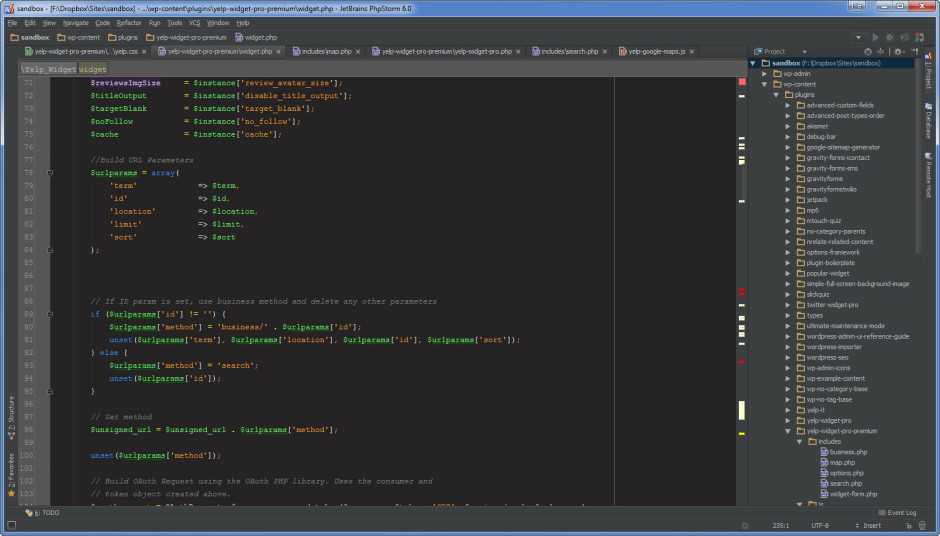 Check out the nice folder icons:

Do you know what this latest version reminds me of? Sublime Text 2 out-of-the-box. Everyone loves Sublime Text 2 and rightfully so. I agree, it looks and feels nice to work with but I found PhpStorm worked better for my needs and have managed to turn a number of developers onto it.

Keep in mind the screenshots above are on a Windows 7 computer, not a Mac. Personally, I think PhpStorm and applications in general looks much sleeker on a Mac. I’m planning on getting my own soon, but for now it’s Windows.

Additional Highlights of PhpStorm 6 include:

Do you use PhpStorm? If so, what do you think about the latest version? Please leave a comment below!

Let’s replace the contents of a tag with some Regular Expressions!

Experiencing slowness with you Windows 8 system using XAMPP or DesktopServer? Here’s a fix I found that sped me up 5x.

WordPress 3.0’s menu system already rocks, but check out what you can do with this GoDaddy-like menu system with custom “walkers” containing descriptions.

Here’s a useful list of object property values and explanation you can refer to in your JS coding adventures.

We all love WordPress custom post types, but don’t you hate those peski 404’s? Here’s a useful checklist to help fix the issues.